Oh how I love going on a vacation, the van is packed to the top with things we may need, a weeks worth of food prep so I don't have to cook when I get there and then we go out to eat half the time anyway, and listening to the same movie over and over in the drive. But honestly how can you pass up a few nights of this view?

This makes a 5 and a half hour drive worth it!
This time around Shirty and I even got a some time with out the kids. They were lucky enough to stay here with their grandparents and him and I drove a little farther and went to see the Twins play! I grew up going to at least one game a year and it was so nice to take Shorty to a game in the new stadium. It didn't hurt that the Twins win too!! I made sure to post we were there cause I swear there is always someone posting they are at the twins game, low and behold my cousin said they were there too so I was able to see them as well!!❤️❤️ 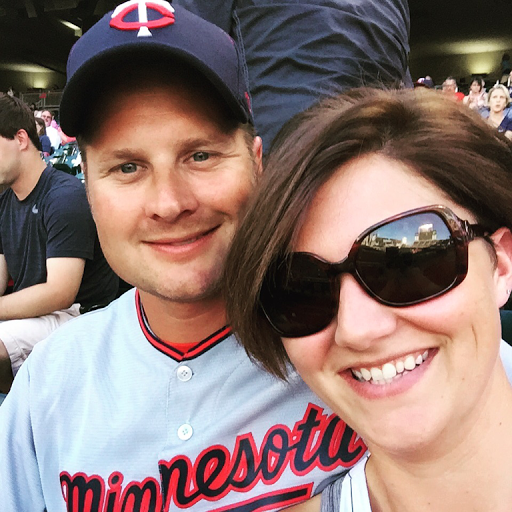 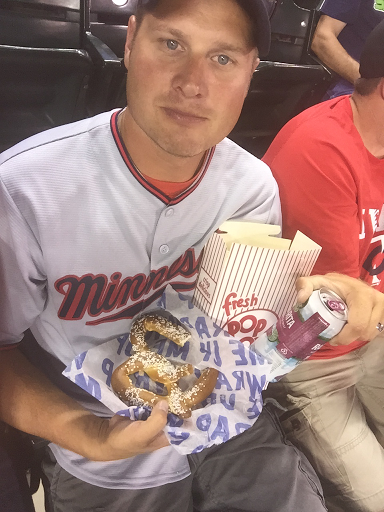 He had to experience all it had to offer!
Sometimes as parents you want your kids to experience everything but sometimes you need to remember as a couple you need your time too.  This was only the second time I've left Joce alone over night since she was born and she is a year and a half now, a night away was needed.
This was just the beginning, we also went to a street dance concert with my brother and his girlfriend, so much fun!! 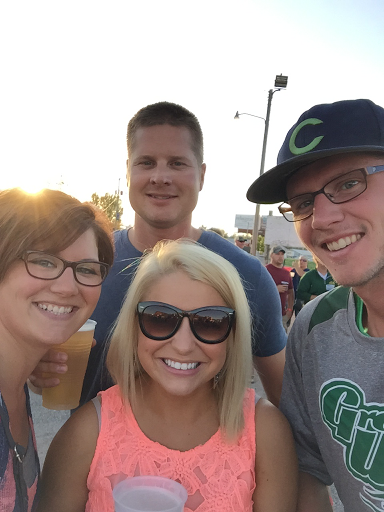 After this a fun weekend of family and friends at the cabin and to finish the weekend off my state softball tourney that we are headed to now.
Moral of this post: a vacation doesn't always mean getting away from it all but enjoying it all everywhere you go 😊
Posted by Life on 4th Ave at 10:55 AM No comments:

Hey Everyone! So my little town is having their big celebration this weekend, Turtle Days! Our church's quilters aid is displaying their beautiful quilts and I was called and asked if I would like to display this quilt 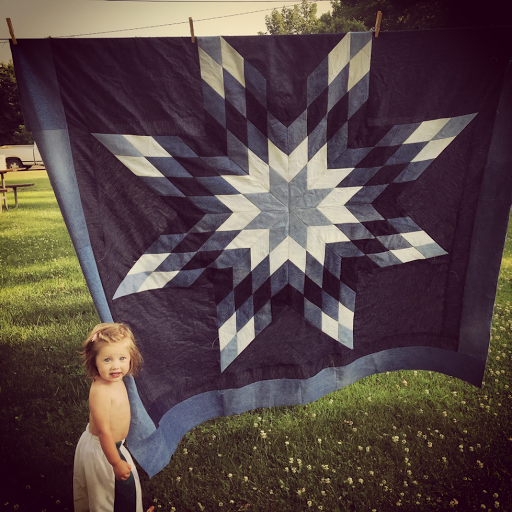 (That's my little JJ)
You have no idea how honored and blessed I am to even be thought of! This quilt is made primarily of old jeans. I love being able to take Jeans and make beautiful quilts. Now don't get me wrong, who doesn't have a few regular square patch denim quilts? And who doesn't love them? Super easy to shake off, heavy and warm for those cold nights, but everyone already has one. A friend of mine, her mother had made her a Lonestar denim quilt when she graduated high school and I have always loved it so I wanted to make one for myself. Once I figured out how to cut it and move the stips it really wasn't that hard (it did take a few pairs of jeans to get that right thought). Maybe one of these days I'll write up a pattern for this using jeans!
Have a great weekend!
Posted by Life on 4th Ave at 7:24 AM No comments:

Email ThisBlogThis!Share to TwitterShare to FacebookShare to Pinterest
Labels: Not your Grandma's Denim Quilt

I love the week after school gets out here, my nephew comes to stay with us and attends the local Vacation Bible a School! I just love having him here and so does his cousins. Thad and him play for hours and he just dotes over Jocelyn! 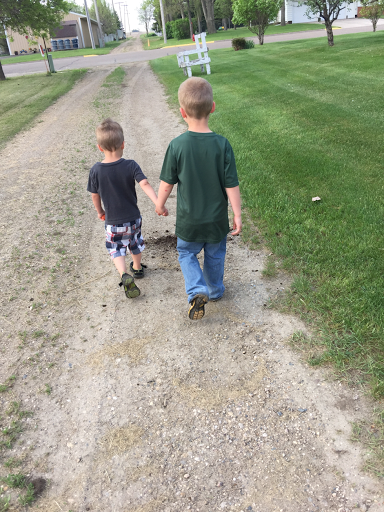 The only problem I have is when we get to the end of this ally the church is a block away, Thad sees it and realizes that Gavin is going and he is not and he will throw a big fit! I talk to him and tell him Gavin will be back in the afternoon but no use and since he's still not taking its a one way communication. We get home and he'll sit in the wagon and cry or pout for about 5 minutes which I ignore and then everything is over. How do I prevent the tantrums in the first place?!
Posted by Life on 4th Ave at 7:53 AM No comments:

Happy Mother's day! I am so very blessed with 2 amazing kids a mother who loves me for all of my faults and an incredable mother-in-law (not to many people can say that). This weekend had been great. Yesterday we meet up with my parents for lunch a little bit of shopping and with Thad that's a lot right there. He won not one but TWO stuffed animals in one of those quarter crane machines. I have never seen that boy so proud of this winnings. He ran down the halls of Walmart looking for us (he was with his Grandma) so he could show them off. On the car ride home Jocelyn was getting fussy and Thad handed her his fox that he won so she would be happy. What a great older brother he is turning out to be!

Today there was a small children's carnival to support one of the local daycares in town. There was small games and face painting and a bouncy house. I thought Thad would just love the bouncy house like he has in the past but today it just wasn't happening.

We were able to go to the farm tonight and have a nice meal with Travis's parents and sit down and watch a movie with them, something we never stop and take the time to do. It was a nice calm day. I even got a little sewing in.

To cap the evening off I just want to say, Happy Mothers day one more time to all the amazing women out there who work so hard to be able to give their children everything, to the moms who sacrifice themselves to stay at home to take care of their kids, do the single moms just doing their best and to the dads who are doing it alone. And to the women who would give anything just to have a screening kid in their arms to call their own, I am sorry. I remind myself when I've had it up to here with Thad's running and tantrums or Jocelyn's playing in the toilet that I am blessed and a number of women would trade places with me.

Till tomorrow, Good night.
Posted by Life on 4th Ave at 10:28 PM No comments:

I have two children, Thad and Jocelyn (Joce) ages 3 and 1 respectively.

Thad is the oldest and you can tell.
He's protective of his sister and he doesn't like to share.
He's so smart and clever.

However, he's not talking and he's behind socially and it makes me sad.
I know, I know, he'll get there, give him time and all that but when they need to know how to spell their name and count to 30 and know their colors all before Kindergarten I'm worried that if he doesn't start now he'll be behind before he even starts.
We've been working with him, we've had people working with him,
and now that he's three he's at getting speech therapy through the school.
Yesterday the Speech Path came into the Library where I work and gave me a trace out of his hand
with paper accordion saying I love you this much.

I know, something simple. Something most parents have gotten from their day care or have made with their children so what's the big deal.

This was a VERY BIG DEAL!
Thad let her hold his hand down long enough to trace it with out having a melt down.
I almost cried when she gave it to me knowing how much it would mean to me.
I am so lucky to have an amazing person in my life, not only as a friend but the one to help Thad over come his speech troubles.

Jocelyn is my baby, my girl, the only granddaughter and spoiled beyond belief
She is a fun seeking little child. She loves to explore with her brother.
She can climb up stair and toys but can't get done yet and that makes her so mad!
This is where I have a hard time.
She is amazing, learning new things every day, starting to mimic words.
I feel like she's not getting the attention she deserves sometimes cause I'm trying to get Thad to talk.

But that's my burden as a parent. You try to be fair as you can, treat them as equal as possible.
I keep telling myself that bad parents don't know they're bad parents and the ones who worry about their kids are at least doing one thing right.
Posted by Life on 4th Ave at 3:15 PM No comments:

Good Morning Blogging world. I read Mommy Blogs and Crafting Blogs, follow this post and that on Pinterest and click on God knows how many links though Facebook. There will be an hour or two that easily go by with out me even realizing that I have done nothing.

This Blog will be my fresh start.
Writing shall be my outlet.

I will be posting about mothering, sewing, crafting, life in a small town.
Most of these things will be blunders and mishaps, but on the rare occasion something wonderful.

Have a GREAT TUESDAY! Hope to see you soon.
Posted by Life on 4th Ave at 7:55 AM No comments:

Well As most moms know I've been busy with taking care of TC. I'm not sure what I was thinking, I thought being home with him would give me more time. Spend some afternoons in the craft room sewing or making nice dinners for the hubby and me but no. Now it seems that I'm busier then ever. Love every minute of it but with I could go and sew a bit.

I got a new band saw for Christmas so I've been playing with that as well. I think for TC's birthday party I'm going to make little mustache tags out of a thin wood. Any suggestions for a Mustache Themed birthday party?
Posted by Life on 4th Ave at 9:24 AM No comments:

Life on 4th Ave
Welcome! This blog is a little of everything. I don't want to call what I do crafting, it sounds a little to much like summer camp, what I have is hobbies, and lots of them. Sewing, quilting, scrapbooking, card making, painting, photography, and so much more!